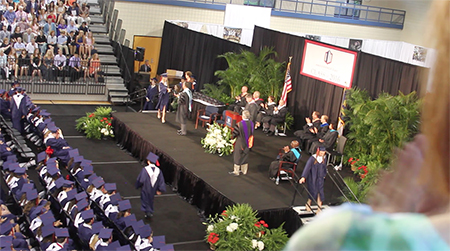 The Class of 2016 has officially become alumni of Providence Day School.

“Whether it is five years from now or 50 years from now, this campus will always be your home,” Dr. Benjamin Robinson, Board of Trustees chair, told the graduating seniors.

The 42nd commencement ceremony, honoring the 144-member Class of 2016, was held in the Mosack Athletic Center June 3.

Dr. Robinson told the graduates they had “distinguished themselves as a class of excellence” — in academics, arts, global studies, social responsibility and athletics.

“And while this day is certainly one to look back at all the wonderful memories, challenges and accomplishments that you have experienced here at Providence Day,” said Dr. Robinson, “it is also a day to look forward to your lives as alumni of this very special place.”

Andrew Swann was named Valedictorian and Sara Cotsakis was named Salutatorian. Grace Clements won the Head of School Award, given to students who exemplify the school’s mission — a passion for learning, a commitment to personal integrity and a sense of social responsibility.

During his speech, Swann told his classmates he didn’t want to say goodbye.

“As we students leave Providence Day School, our departure shall be far from a poignant and short farewell, for we shall never truly leave,” he said. “Too much of this place has embedded itself within our memories … nor can we truly tear ourselves from this school, for its people have wormed their way deep into our being. We are bound by bonds of memory and compassion that distance cannot break.”

So instead of farewell, Swann said, “I will simply say thank you — for everything.”

The Commencement address was to be given by Dr. Abigail Caudle ’92, assistant professor at the University of Texas MD Anderson Cancer Center, but she was unable to attend due to flight delays caused by severe weather in Texas.

In her stead, Dr. Glyn Cowlishaw, Head of School, gave the address in which he highlighted the Class of 2016’s many accomplishments — from awards and honors to all being trained in CPR.

The senior class left two parting gifts — a donation to the Children’s Defense Fund Freedom School program, which PDS hosts every summer on campus — and a gift to the campus, a spiral sphere sculpture that rotates in the wind — a “modern inspiration on balance, unity and growth” that the seniors felt represented the key characteristics of the Class of 2016.

During the event, a graphic recorder created in real time a summary of the ceremony — the speeches and significant moments to create a visual representation. The board will be displayed on campus throughout the year and at Class of 2016 reunion events.

For the second year in a row, the entire ceremony also was streamed online — it was watched live by about 1,350 people, from across the United States, the United Kingdom and Germany.

Also, PDS seniors, their families and friends, and alumni were encouraged to use the hashtag #PDS2016 to share Commencement experiences, reflections and well-wishes. See a #PDS2016 compliation.

-- The Class of 2016 earned 608 acceptances to 177 schools in 30 states, the District of Columbia and six foreign countries (China, England, France, Italy, Scotland and Spain).

-- Students will attend 68 different colleges and universities in 24 states, the District of Columbia, China, England and Spain.

-- 55 percent of the seniors were admitted to colleges and universities in the “Most Competitive” category (80 schools) as definied by Barron’s Profiles of American Colleges.

-- A separate Global Studies Diploma is being awarded to 18 seniors who completed additional curriculum requirements. PDS was the first school in the nation to offer such a distinction.

-- 85 percent of the seniors were offered merit scholarships or honors program opportunities, with an earned scholarship amount of approximately $13.3 million.

-- There were 5 National Merit Scholarship Finalists and 9 Commended Scholars.

-- 8 seniors will be participating in NCAA intercollegiate sports.

-- The Class of 2016 includes 54 “lifers” — students who have attended PDS since at least the 1st grade — and 6 seniors have at least one parent who graduated from PDS.