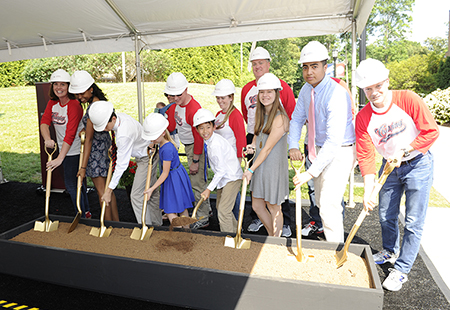 A culture of philanthropy has long been a hallmark of Providence Day School. So when school leaders embarked on a $27 million fundraising campaign, they expected the community to rise to the challenge. They were not disappointed.

The school held an official groundbreaking ceremony this afternoon, signaling a major milestone in the “Charging Forward” comprehensive campaign. Current Providence Day parents and well-known philanthropists Howard and Julie Levine, Brian and Amy France, and Michael A. DeMayo have provided significant momentum to the effort by each committing $1 million gifts to the school. 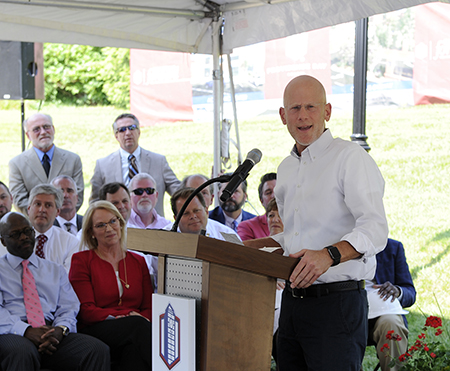 During the ceremony, Howard Levine took to the podium and surprised the crowd with an announcement of a $1.5 million matching challenge grant.

“Julie and I were early investors in the CHARGING Forward campaign at a leadership level because of our strong belief in this school, its leadership, and the very clear and compelling impact that this effort will have on teaching and learning,” he explained.

The Levines will match all new gifts and/or commitments on a two-for-one basis up to $500,000. At its successful conclusion, this challenge will make their total commitment to the campaign $2 million.

“We are so incredibly pleased to do this for Providence Day,” he said.

In a message to the school community in April, Board of Trustees chair Benjamin Robinson and Head of School Dr. Glyn Cowlishaw jointly announced the school would begin construction in Summer 2016 on three capital projects included in the campaign.

“This transformational initiative has been met with incredible acts of philanthropy from our community, with more than $19 million being raised in less than three years. The decision to break ground this summer was based on several positive factors, including a booming construction industry, a strong economy, and the widespread enthusiasm our community has shown thus far by investing in the campaign.”

The CHARGING Forward comprehensive campaign is a projected five-year, $27 million initiative with three investment priorities: capital projects, endowment, and Annual Fund. The campaign is the largest fundraising goal undertaken in the school’s 45-year history. Cathy Bessant, Chief Operations and Technology Officer at Bank of America, is serving as the National Campaign Chair.

The CHARGING Forward campaign’s three capital projects include an Academic Center, Campus Gateway building, and a parking deck. These elements will be the first major additions to the campus in four years. Officials also seek to double the school’s endowment and grow the Annual Fund, which supplements each year’s operating budget in support of student programs, campus resources, and faculty professional development.

“The CHARGING Forward campaign is indeed a bold effort for our school and our community,” explained Cowlishaw. “It will be transformational for our campus and for future generations of students.”

The Academic Center, Campus Gateway building, and parking deck were designed by respected local architectural firm WGM Design, Inc. WONDER, by Design, a multidisciplinary team specializing in the “future of learning,” was a collaborator with the school and WGM Design on many of the innovative learning spaces within the Academic Center. Hendrick Construction Inc. is the general contractor.

Construction is anticipated to be completed by Fall 2017.

Academic Center
The 4-story, 80,000 square foot building is slated for the heart of campus between the Dickson-Hemby Technology Center and the Thompson-Jones Library. The Academic Center will feature 35 classrooms, a lecture theater, collaborative learning center, a global café and a new school store. The building has been designed with input from Providence Day faculty and students to encourage an interactive, collaborative approach to learning, inspire innovative thinking, and significantly improve pace of life for students and teachers. The $2 million and $1 million commitments from Howard and Julie Levine and Brian and Amy France, respectively, are the lead gifts supporting the Academic Center.

DeMayo Family Gateway Center
The new “front door” to the school, the 7,200 foot Campus Gateway building will serve as a welcome center for the campus. The Gateway will house both the Admissions and College Guidance offices, creating the opportunity for students and families to begin and end their PDS journey in the same location. The Gateway Center is named in recognition of the DeMayo family’s $1 million commitment.

Parking Deck
A two-story deck will provide 200 parking spaces in front of the DeMayo Family Gateway building. The enhanced parking will increase student and pedestrian safety by reducing vehicular traffic through campus.

Endowment
The Charging Forward campaign aims to double the total endowment from $6 million to $12 million, a critical step in ensuring the school’s long-term fiscal sustainability.

Annual Fund
The goal is to raise $6 million over the course of the Charging Forward campaign in support of the Annual Fund. In conjunction with the campaign, donors to the Annual Fund can select from a family of funds, including area of greatest need, faculty support and professional development, student financial assistance, arts, and athletics.

Learn more about the Charging Forward campaign at www.pdschargingforward.com.