Brett Doar ’91, a multi-disciplinary artist known for building Rube Goldberg machines and other interactive and kinetic devices for a wide range of clients, has returned to the Providence Day School campus as a visiting artist Jan. 19-22.

As part of the Visiting Artist program sponsored by the Visual Arts Department, Doar has been visiting Upper and Middle School art classes and giving presentations to students about his work, experiences and advice on how to be successful in life.

"It's been good to see some old teachers and coaches who are still here, and to meet the folks who have come on in the last 25 years," said Doar. "It's been a good reminder of what a special place PDS was and is, and to see that the mission is still the same."

After PDS, where he said he learned that “creating art could be an intellectual practice,” Doar’s undergraduate studies ranged from architecture to linguistics at several schools on the east coast. He earned a master’s in fine arts from the Arts, Computation and Engineering program at the University of California, Irvine.

Among other things, he worked as a teacher and video editor before garnering fame from merging art with engineering, or as he describes himself, a “builder and designer of poetic machinery.” 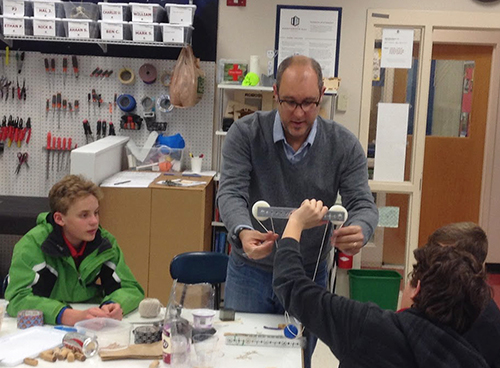 "Simply stated, I design and build machinery, which is often for an artistic purpose," he said.

His kinetic sculptures have been displayed in the United States and Ireland, but he is perhaps best known for his imaginative Rube Goldberg machines, such as ones he’s built for Disney, “The Colbert Report,” Google Zeitgeist, the band OK Go’s “This Too Shall Pass” music video and the Red Bull Kluge. Other clients include General Electric, Nokia, Microsoft and Goldie Box; his work has been covered by numerous news outlets, including CNN, Rolling Stone, NPR and the New York Times.

In his interactions with PDS students, Doar encouraged them to be innovative, to pursue their passions and to consider struggles and disappointments as learning opportunities.

“I think Brett is great at sharing the creative process and that failure is an option,” said Derrick Willard, Assistant Head of School for Academic Affairs. “I think it is important for students to hear that there is not always a recipe for success, that learning is iterative and failure teaches valuable lessons.”

Doar said he wanted to encourage the studens to not be afraid to explore and pursue things that have meaning to them.

"I also think the idea of success is important," he said. "If success is always something that is defined by someone else, then you're not in control of that. But if you define success for yourself, then you have power over whether you're successful."

Doar said students should set goals for themselves that they have control over, and if/when they meet those goals, they are successful.

"They might be doing something that nobody else believes in, but if they're able to do what they set out to do, that's success," he said.

"All these things are tools that we can use, and having a big toolbox makes you powerful," he said. "Even if you never become an artist or an engineer or scientist, having some experience in these areas, and fluency in them, means that you can apply other perspectives to whatever you end up doing, wherever you are."